I got hacked. New server setup

On the second day of Elastic{ON}, I woke up to an email from my VPS provider saying that my server was participating in a DDoS attack. Network access had been suspended, and I needed to back up any data and kill the server. I had console access via their portal, so I logged in.

Turned out ElasticSearch was the culprit. I found a bash console running under the elasticsearch user, so I killed all their processes (and Elasticsearch). If you are not on on the latest version, you need to be. And if you have dynamic scripting on (the default in previous versions), you need to make sure it's off.

I didn't have much of import on there anyway, so I just blew away the server. Then it was time to figure out a new, more secure setup. I use this server to try out quick apps I do on the side. They don't take very much in terms of resources. Usually they just need a basic app run, and a service like Postgres, Redis, or Mongo at very low scale. There's no reason to have one or more servers per app.

Heroku has the auto-sleep thing, which sucks, and not all addons are free at the intro tier. For example, Found.

My first thought was Docker, because it's the new hotness.

While I could run just base Docker, I just can't justify having to do these things manually. For now, I'm sticking with the "just a linux box" architecture.

Enter chef-solo. I'd been itching to write a setup & config script for a while, especially since my apps have so many components in common. Upstart, monit, logrotate, cron jobs - it's way better to have this stuff in a repo than just sitting on a server somewhere.

Plus, the recipes for the most part come with secure defaults and recommended best practices right in the REAME. My final repo stack ended up using:

This made it super easy to write some chef scripts, run a test build on a Vagrant box, and then deploy it to my shiny new dev server. My blahg here is running on nginx on it, since it's built with Jekyll, Grunt, and rsync, modified from the super-nice yeoman generator.

My new setup is hopefully more secure, and won't be going down again for a while.

Why? Because job security. See also: Coding in Emoji with Swift

Mattel® released "Barbie: I Can Be A Computer Engineer" back in 2013. It was apparently the most sexist Barbie book ever. Barbie is totally incompetent - she infects her and a friend's computer with viruses, only makes the "designs" for a game and relies on male friends to code it, and then takes all the credit for the eventual game.

It made waves this week; somehow people only noticed it now. Mashable did a great writeup, and the book got hundreds of one-star reviews on Amazon before being de-listed. The internet continues to rag on it via the #FeministHackerBarbie hashtag, taking pages out of the book and re-captioning them.

I am seriously cracking up. Here's one of my favorites via Livelyivy: 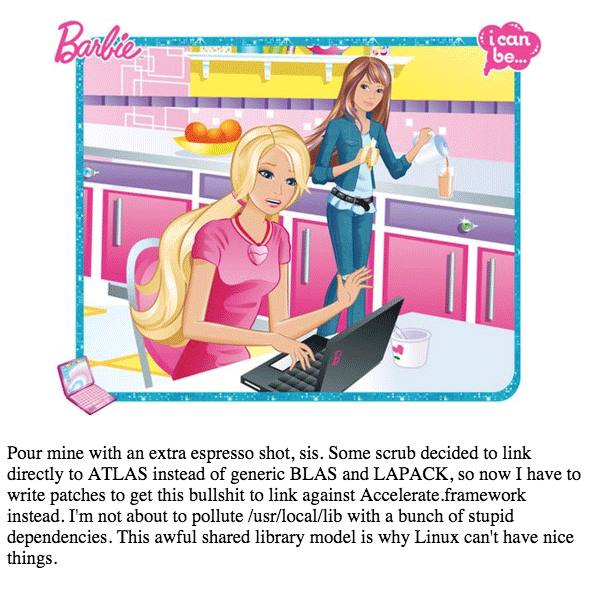 There's also a tool for making your own version, and it's great. Here's mine: 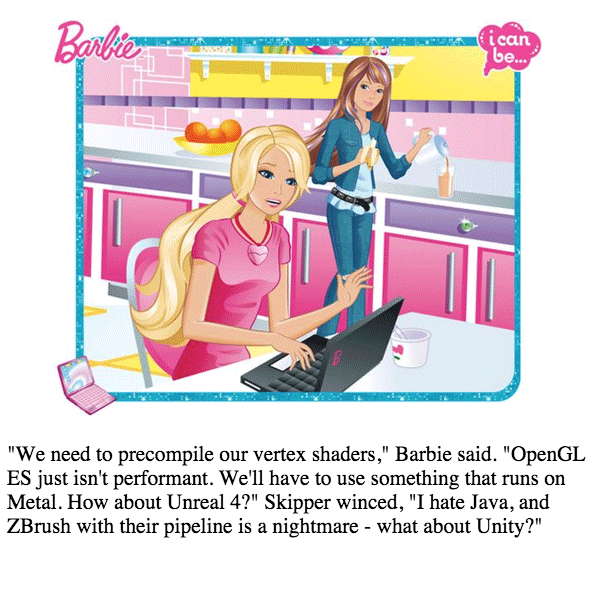 WYSIWYG is a disaster

I've been trying to find a good WYSIWYG editor for simple CMS I'm building. My project just needs to make static pages - you know, /about, /faq, etc. The idea was that even if a developer had to write the HTML, anyone could go in and fix a typo or add a paragraph. My requirements for the html editor were pretty simple, I thought:

Of course, you can't just use contentEditable directly. The Guardian has a great run-down of inconsistencies they found while building their back-end.

As has ever been the case, there are dozens of js libraries to do this sort of thing, and figuring out which ones are even worth investigating is a huge and draining process. Unfortunately my go-to for this sort of thing was out. Readactor is excellent, with a good API, good documentation, and readable code. But it's not free, and I want to release this as open-source.

The bottom line is that WYSIWYG editors for HTML are awful, and have been ever since Dreamweaver. I never thought about why it was an impossible concept until I read Nick Santos' article about Medium's editor.

Now I'm trying to figure out if I should accept an ugly, duct-taped-together interface for my CMS or just screw it and use Markdown.

Got an email from the folks at Froala, which frankly looks pretty awesome. Good docs, html cleaning and class assignment. There is a distributable open-source version, so theoretically you could package it in to a project like this. But like Redactor, the "real thing" and un-minified source code are paid products.

WYSIWYG editors are hugely complicated, and this is one place I can totally justify paying for development tools and software. Compared to the time-sink black hole that is trying to roll your own, it's a steal.

Other post-checkout hooks try to auto-run migrations or bundling for you, but I feel like those are pretty error-prone. On the other hand, just getting notified is pretty helpful.

How to Profile a Leaky Sidekiq Job in Heroku - Happy Bootstrapper

Javascript - the style is the substance

Javascript is an interesting language. While Ruby has a style guide, and Python has a few (including Google's, they are not critical to how your code functions. They just help avoid those "strip whitespace" commits that touch every line in your repo and permanently ruin git blame.

With Javascript, the style is the substance. Take these two for example:

These seemingly small differences might not affect how a short script works, but they are critical to how your app works as a whole. The first declares a single object. The second declares a global variable. The third declares effectively a factory function.

Newlines can result in syntax errors for strings. Missing semicolons can ruin your JS after compression. Using reserved words as object keys can break your code in some browsers. Failing to use === can result in unexpected behavior.

It is essential to use a Javascript style guide. Frameworks like Express and Angular can help standardize things like object and module declarations, and CoffeeScript can provide syntax sugar to cover simple issues.

Otherwise, AirBnB's style guide is comprehensive and helps show best practices. Pick something, and stick with it, especially if you are working on a team.

This is funny XD

Update: Extracted this into a gem (in beta): HappyTime