String#remove_formatting , from the StringEx library. Gets rid of unicode griefer chars, html entities, basically any BS you can think of.

What you might miss, and I missed until recently, is that Tweetstorming has some unique characteristics, which I outlined in my storm, that make it different and possibly better in some respects.

What you also might have missed: tweet storms are annoying as hell, in that they clog up the receiver's timeline with a bunch of stuff they may or may not care about, and as a bonus are difficult to read in sequence / context.

Get a tumblr. Post an essay. Post a link to essay on Twitter. I hate that "let's monopolize all my follower's timelines" is gaining legitimacy by giving it a name.

You use the AWS Policy Generator to generate a Bucket Policy. There are several examples online and Amazon has a ton of examples.

Allow viewing & downloading of S3 objects directly via a browser. If, for example, you send attachments via email and also want to link to them on S3.

AWS is so full of its own jargon at this point - set an S3 bucket policy and ACL, but make sure you have the right IAM key, and also CORS doesn't conflict. And that's just for S3. Don't even look at Route 51.

Everything you know about Unix server administration has been reinvented on AWS with slightly different names and parameters, so none of the knowledge is transferrable outside of Amazon's infrastructure. Heavy lock-in. I don't like it.

How is it possible?

Ruby tracks time down to the nanosecond:

Got hit with this while testing.

Chainable method calls are wrong here. It's okay for doing the most basic possible forms, using all the Rails defaults, but for anything else it's crap. See bullshit like this - and that's for sanctioned nested_attributes type calls.

How do we get the values of both :first and :second ? If you know in advance what all the possible keys for :second are, you can do this:

If you don't know exactly which keys are there, or want to use logic based on what keys are present... well, no. Definitely not.

If you're doing doing something like tags, lists, or other things that don't nicely map to one parameter => single-level hash, you're in for a rough ride. If you only want to allow certain attributes to be edited by certain users, you need a hacky workaround like building up a giant array or hash before calling .permit . If you want to call params.permit in a before_filter, get lost. If you want to save Javascript logs or something else with a totally arbitrary structure, go die in a fire.

A better model would be to pass a schema to StrongParameters. Imagine if we could call something like this:

This would be way nicer - you could specify conversions so you don't get strings where you expect numbers or booleans. You could specify what sub-attributes to allow on a hash or array, or just use the raw class if you want to sort it out yourself. And, this theoretical schema method would just return a new Parameters instance with the schema applied - if you wanted to get different attributes earlier or later in the request, just call params.schema again.

I've been developing with Rails for ten years now. If I find this crap difficult, I can't imagine what people in coding boot camps must think of it.

Your marketing emails are not cute

Getting real sick of your shit, startups. These marketing emails are not cute. They are (in order) condescending, creepy, and insulting.

No, I didn't forget, but thanks for making me think for a second that I had. 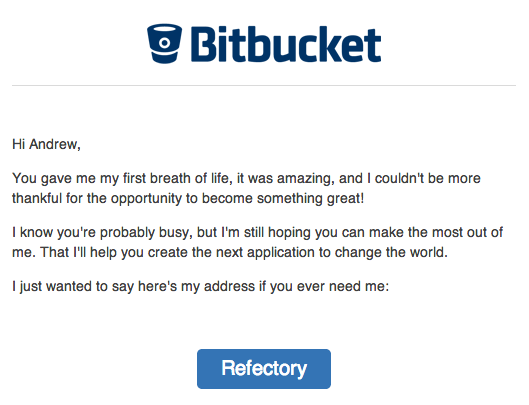 Is my repo gonna commit suicide unless I stay with it? Does it need me to love it forever?

Forwaded from a friend, but I got this one too. No, Homejoy. Actually, I can take care of myself without you. You're convienent. When you're not insulting me.

BitTorrent Chat: The Want for Privacy | The Official BitTorrent Blog

To start, users will be able to choose how they use our chat app. If you are porting in contact lists, you have the convenience of signing up with email or with a phone number. You will also have the option to sign up in Incognito mode, using no such information at all.

What we are building for the Alpha will also address users communicating with a trusted source who prefer their communication to be device-to-device (decentralized). This means no hops through any 3rd party servers, and no chance of anything being intercepted.

For users who may prefer to have their metadata obscured, messages will be indirect and routed through a third node. It is all a matter of preference.

Showing users directly how their message is being routed is genius. Using relay servers to obscure metadata is cool, but how would users know which relay servers to trust? Or are they supposed to set up their own?

I'm also curious is mesh networking will play a role here. Really sets up some cool cyberpunk scenarios where a journalist and a source can "meet" by being on the same block or in the same highrise, but without knowing what the other person looks like, their real identity, or exactly where they're at, and being able to chat without the NSA et al being able to pick up the traffic.

The design integrity of your system is far more important than being able to test it any particular layer. Stop obsessing about unit tests, embrace backfilling of tests when you're happy with the design, and strive for overall system clarity as your principle pursuit.

I think it's hilarious that TDD has gone too far for DHH. And I like his thoughts around the matter - test what's important, at the important levels. Don't add dozens of gems and layers of indirection and library magic just for testing.

This series means to teach you everything you need to know to implement any different caching level inside your Rails application. It assumes you know nothing at all about caching in any of its forms. It takes from zero to knowledge to an intermediate level in all areas. If you can't implement caching in your app after reading this then I've failed.

My Quest to Build the Ultimate Music Player - Andrew Kelley

So, how hard could it be to build my own music player backend? Seems like it would be a matter of solving these things:

Playing music on a computer is almost as hard as reading text files. At this point, I'd be pretty happy with a player that:

The loudness compensation and gain equalizing is not a big deal to me - I prefer to listen to DJ mixes and entire albums, so the next track is rarely going to be mixed differently than the previous, and it's too easy to introduce playback bugs there.

iTunes fails at all of these - syncing with iTunes Match blows, you have to make playlists for every folder, and it loooooves album art (even when most of it is missing). Also, it crashes constantly on windows.

Google Play Music (wtf branding) fails at 1 and 2, and I didn't get far enough to experiment with 3. Seems good enough at 4.

Rdio doesn't let you play your own music, and they sure as hell aren't gonna have the new (free!) album from Illectrix or Savoy's new album Self Predator

Spotify has terrible local vs cloud syncing, and pretty bad playlist management. Basically, if you're not getting all your music from their landfill of pop hits, get lost.

Amazon Music looks like it hits 2, 3 and 4. I have enough playlists at this point that maybe 1 won't be a problem.